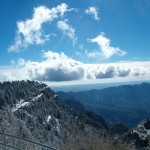 Albuquerque lies west of the Sandia Mountains, which are especially noted for the brilliant colors they give off at sunset. Within easy distance of Albuquerque you can find an array of nature you’re not likely to find in many other places—breathtaking mountains and valleys, bluffs, caverns, and even deserts. There are numerous scenic drives throughout New Mexico, and 33 state parks where you can enjoy unforgettable outdoor experiences. In Albuquerque itself the Rio Grande and numerous parks will give you plenty of incentive to get out and enjoy the outdoors. The city is noted for its many bicycle paths and hiking trails, which often overlook scenery of the sort seldom found in large cities. With so many things around to dazzle their eyes, Albuquerqueans are known to spend a lot of time enjoying outdoor activities. As a result, Albuquerque is widely regarded as one of the fittest cities in the United States.

You can enjoy four seasons in Albuquerque, but none too extreme. Two to three inches of snow normally fall during each of the winter months, so a white Christmas is entirely possible, but you’ll seldom have to look for a shovel. Even so, a short drive will give you the opportunity to enjoy snowier surroundings and even an afternoon of skiing. Winter daytime temperatures in Albuquerque normally stay close to 50 degrees, so there won’t be any reason to give up favorite outdoor activities like golfing, walking, or biking. Spring and autumn are dry and comfortable, and, with an average elevation well over 5,000 feet, Albuquerque is known for summers that are more comfortable than you might expect, with daytime temperatures often in the 80s and refreshing nights that will make you want to keep the bedroom window open.

The landscapes around Albuquerque are as varied as the culture you’ll find in the city. Without a doubt, Albuquerque is a center of diversity, and one that is quick to embrace seniors looking to make a new life there. If you’re looking for new challenges in a city noted for its culture, amenities, low cost, and laid-back attitude, it would serve you well to add Albuquerque to your list of places to consider.

Enjoy your retirement years—and let MedicareMall find the senior health plan that’s best designed for what you want to get out of retirement!

What location are you considering for retirement? Leave a comment below.