Diabetes: Are you over-monitoring your blood sugar?

New evidence shows that many people with type 2 diabetes test their blood sugar levels too often, which costs hundreds of dollars a year.

A recent trial has shown that weight loss can send type 2 diabetes into remission. Now, researchers explain why it happens, and why it doesn’t always work.

In the United States, approximately 85 million people have high blood pressure – about 1 in every 3 adults over 20, according to the American Heart Association (AHA). The National Institutes of Health (NIH) estimate that about two-thirds of people over the age of 65 in the U.S. have high blood pressure. If left untreated or uncontrolled, high blood pressure can cause many health problems. These conditions include heart failure, vision loss, and kidney disease. END_OF_DOCUMENT_TOKEN_TO_BE_REPLACED 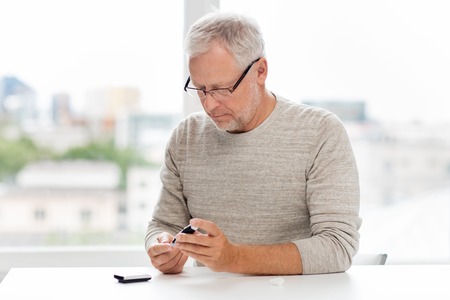 Medicare patients have gained access to a device that allows people with diabetes to keep tabs on their glucose levels without having to routinely prick their fingers, Abbott Laboratories announced January 4th.

Abbott’s FreeStyle Libre System, which was approved by the U.S. Food and Drug Administration in September and launched in U.S. pharmacies in November, has met the criteria for therapeutic continuous glucose monitoring used for coverage by the U.S. Centers for Medicare & Medicaid Services, Abbott said.

It is the first Medicare-covered continuous glucose monitor that requires no regular finger-stick or manual data entry for calibration, the company said. It is meant to reduce the intrusion and inconvenience of pausing one’s life multiple times a day to get a blood sample.

The Freestyle Libre is a flash glucose monitoring system that includes a sensor worn on the back of the upper arm and a handheld reader. The sensor uses a thin filament that’s inserted underneath the skin to measure glucose levels every minute. The handheld reader is used to scan the sensor. The factory-calibrated FreeStyle Libre system is the only CGM system recognized by Medicare that requires no user calibration whatsoever (either by fingerstick or manual data entry). The high accuracy of the FreeStyle Libre system allows for patients to dose insulin based on the results.

Designed to be approachable, accessible and affordable for the 30 million people with diabetes in the United States, the FreeStyle Libre system reads glucose levels through a sensor that is worn on the back of the upper arm for up to 10 days, making it the longest lasting personal glucose sensor available in the U.S.

Key differences between the FreeStyle Libre system and other CGM technology include:

Last year, CMS announced coverage for therapeutic CGM for certain beneficiaries who have either Type 1 or Type 2 diabetes and intensively manage their insulin. To be included in this category, the device must be approved by the U.S. Food & Drug Administration (FDA) for use in place of a blood glucose monitor (BGM), enabling patients to make treatment decisions based on the information provided. With the recent approval by the FDA, the FreeStyle Libre system can be used as a replacement for BGM.

With the FreeStyle Libre system, people with diabetes can:

This article was originally posted on PositiveHealthWellness.com

For people with diabetes, Medicare Part B will cover blood glucose monitors, test strips, lancet devices, and lancets. In addition, glucose management solutions for those with diabetes are covered whether someone uses insulin or not.