Medicare and Medicaid can be confusing, partly because the names sound so similar. But they’re two very different government healthcare programs. Medicare focuses on adults age 65 and older and Medicaid focuses on low-income individuals and families. The benefits, costs, and eligibility requirements are different for each program. Neither program has automatic enrollment so it’s important to understand what each one offers. Knowing which to apply for helps maximize your healthcare benefits. 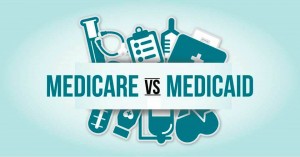 The next key difference is that Medicaid covers long term care services and support. Medicare only covers short term stays in skilled nursing facilities after a hospitalization. In fact, Medicaid is the nation’s largest single source of long-term care funding. Medicaid can cover the cost of nursing homes, assisted living communities, and other long-term care alternatives as long as they’re deemed medically necessary.

What is Medicare?
Medicare is an insurance program that’s available to U.S. citizens over age 65, regardless of income.  If someone is covered by Medicare, their medical bills are paid from trust funds that they’ve previously paid into through Medicare payroll taxes.

Who qualifies for Medicare?
Anyone age 65 or older with a qualifying work history (their own or their spouse’s) is eligible for Medicare. Most people who’ve worked for 10 years at a job in which they paid Medicare taxes will qualify.  Younger people with certain disabilities or end-stage renal disease may also qualify.

Who runs Medicare?
The federal government.

What does Medicare cover?
Medicare is available through a 4-part program. The coverage depends on the plans selected.

How much does Medicare cost?
The cost of Medicare depends on the chosen plans and coverage. Costs typically include premiums, deductibles, copays, and coinsurance.  The premium for Part A is free for people or their spouses who have worked at least 10 years and paid Medicare payroll taxes while working.  Most people pay a Part B premium.  Costs for Part C and Part D will depend on which the plan that’s chosen.

What is Medicaid?
Medicaid is an assistance program that serves low-income people of every age. It helps pay for medical care and long term care.  People covered by Medicaid usually pay nothing for covered medical expenses.

Who qualifies for Medicaid?
Medicaid has strict eligibility requirements based on income and financial resources – not everyone can qualify.  Generally, a wide variety of people with limited income and financial resources can qualify. That includes those who are 65 or older, living with a disability, children under 19, parents or other adults caring for a child, and some adults without dependent children.

Medicaid.gov and BenefitsCheckUp.org have more information about state-by-state eligibility requirements.

Who runs Medicaid?
Medicaid is run by both federal and state governments within federal guidelines.  Because of this federal-state partnership, there are different Medicaid programs in each state. That’s why people who are eligible for Medicaid in one state might not qualify in another. And the types of covered medical services could be different from state to state.

What does Medicaid cover?
Medicaid services are different in each state, but the federal guidelines require coverage for certain “medically necessary” services.

How much does Medicaid cost?
The cost of Medicaid will depend on income and the rules in the state’s program. Certain people may be exempt from most out-of-pocket costs.  Costs may include premiums, deductibles, copays, and coinsurance.

People who qualify for both Medicaid and Medicare Part A and/or Part B are known as “dual eligible.”  When someone is dual eligible, Medicaid will pay for Medicare costs under 4 types of Medicare Savings Programs. The amount that’s covered by Medicaid depends on income level.  For example, if someone has both Medicare and full Medicaid coverage, their health care costs are usually fully covered, including prescription drugs – they won’t have to pay anything out-of-pocket.