Over a third of Medicare enrollees live in just five states—California, Florida, Texas, New York, and Pennsylvania—and it would appear, with higher populations and seemingly more medical options for people to choose from, those states may offer Medicare enrollees some financial advantages or reduced costs. But is that really the case?

Some states, such as Alaska and Hawaii, spend significantly less per capita on Medicare, but there may—or may not—be environmental reasons for that. (For the general population, Alaska’s healthcare spending, per capita, is far above the national average.) In any case, the figures that matter most to Medicare recipients are not the amounts Medicare spends on their services, but the amounts Medicare does not spend. 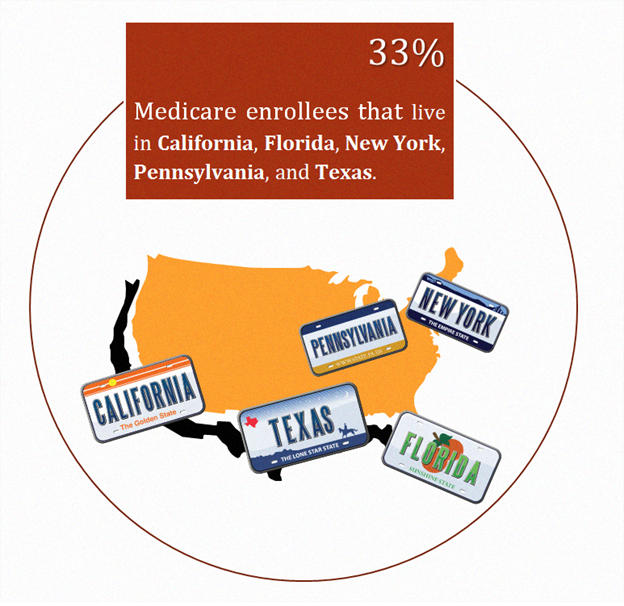 Among the leading Medicare states, per-capita healthcare spending is relatively low in Texas and California, somewhat higher in Florida, and significantly higher in Pennsylvania and New York. As a result, Medicare recipients in New York and Pennsylvania can often expect higher-than-average out-of-pocket costs associated with their Medicare coverage. This is not always the case, though, because of some state government programs designed to help people who would otherwise struggle to pay those costs.

Overall, any minor disadvantages associated with living in states with smaller Medicare populations are more than offset by investing in Medicare plans best designed to meet the needs of individuals regardless of where they live.

Do you live in one of the five leading Medicare states? If so, how does that impact your costs?