Medicare is a mystery to many people, but it doesn’t have to be—so let’s cut right to the chase. Here is everything you need to know about all the parts, plans, and particulars that make up Medicare.

Medicare, established in 1965 under the Social Security Act, is a federal government program providing health insurance coverage to Americans 65 and older, people under 65 with disabilities, and individuals with end-stage renal disease. The primary reason Medicare was established was to ensure Americans 65 and over had some form of healthcare. Original Medicare consisted of Medicare Part A and Medicare Part B. Medicare Part C and Part D, both optional, were added later, as we’ll see in a moment.

Is there a single application for Social Security benefits and Medicare?

You can apply for both retirement benefits and Medicare at the official Social Security website.

Keep in mind that you shouldn’t wait too long to enroll because if you do the start of your coverage may be delayed.

“I heard somewhere that enrollment was automatic. Do I really have to sign up for Medicare?”

You heard right—to a degree. People already receiving Social Security benefits don’t have to sign up for Medicare. Those people can expect a package in the mail three months before their 65th birthday. Unfortunately, it’s not a birthday present they’re getting, but it is something valuable. It’s a Medicare card along a letter welcoming them to Medicare.

Unless you’re already receiving Social Security benefits, you’ve got to sign up for Medicare. If you don’t … well, you’d better have other insurance to fall back on or just not ever get sick.

• Home Health Services … though coverage is limited to doctor-ordered, medically-necessary part-time or intermittent skilled nursing care, physical therapy, speech-language pathology, or a continuing need for occupational therapy. Medical social services, some health aide services, durable medical supplies, and any required medical supplies for use at home are covered as well.

• Inpatient Hospital Stays … including the costs of a semiprivate room, meals, general nursing care, drugs required during inpatient treatment, and other hospital services and supplies. Extras like TV and telephones aren’t covered, but Medicare will pay for a private room if it’s determined to be medically-necessary. Unfortunately, wanting to leave a roommate who’s talking you to death won’t qualify.  Necessary doctor and emergency room service is covered during a hospital stay.

• Skilled Nursing Facility Care … including costs of a semiprivate room, meals, skilled nursing and rehabilitative services, and other required services and supplies. A doctor has to certify that daily skilled care—such as intravenous injections or physical therapy—is necessary. Medicare doesn’t cover long-term care or custodial care in this setting.

• Hospice Care … as long as a doctor certifies that you have a terminal illness and are expected to live six months or less. Coverage includes drugs for pain relief and symptom management; medical, nursing, social services; and some services Medicare usually doesn’t cover, such as grief counseling. Hospice care can continue for as long as the hospice medical director or hospice doctor recertifies that you’re terminally ill.

That sounds good so far. But what does it all cost?

Medicare Part A is premium-free for most Americans—about 99 percent, in fact.

For the vast majority of people, this cost was covered during their working years—or during a spouse’s or other relative’s working years. Only people without a 10-year work history—40 quarters of paying the Medicare tax, either consecutively or broken up over a longer period—have to pay a Part A premium. There’s a 99 percent chance you’ll get Part A premium-free.

That’s the good news. The bad news has to do with the out-of-pocket costs you can expect.

There’s also a little thing called coinsurance, which kicks in big-time in the event you have to spend more than 60 days in the hospital. We’re talking hundreds of dollars a day coming out of your pocket … and I’ll let Medicare.gov provide the details here. But you get the picture.

As far as Medicare Part B is concerned, the annual deductible, currently $147, isn’t too painful. The monthly Part B premium, currently $104.90 for most people, hurts a bit more, but the most painful thing about Medicare Part B is that it normally covers only 80 percent of Medicare-covered medical costs. Original Medicare was designed to get the remaining 20 percent from your pocket. 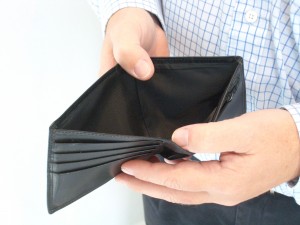 If you have other health insurance, it is still advisable in nearly all cases to sign up for Medicare when you are first eligible. Medicare combines well with most other types of insurance, and especially if you qualify for premium-free Medicare Part A coverage there is no good reason not to enroll in Medicare during your initial enrollment period.

If you decide you don’t want to pay the Medicare Part B premium, you can disenroll from Part B while keeping Part A coverage. Be advised, though, that, if you don’t have other insurance, declining Part B coverage may require you to pay the Medicare Part B late enrollment penalty if you decide to enroll in Part B later. Failing to enroll in Medicare Part B during your initial enrollment period may cause your monthly Part B premium to increase by 10 percent for each full 12-month period you were eligible for Part B but not enrolled in it.

Now, on to the other parts of Medicare …

How does Medicare Advantage work?

Medicare will pay a fixed amount for your care every month to the company offering your Medicare Advantage plan. While Medicare Advantage is a great network-based option for people looking to beef up their Medicare coverage, you have to be aware that companies are generally free to set their own out-of-pocket cost requirements and procedures concerning which doctors or facilities you can use and when. In many ways companies can set their own rules, and the rules can change from year to year.

Instead of requiring enrollees to pay the substantial deductible and coinsurance costs associated with Original Medicare, Medicare Advantage plans often require only modest copayments. As a result, Medicare Advantage is a highly affordable option for Medicare-eligible people who are willing to depend primarily on network medical providers in their area.

The Most Popular Medicare Advantage Plans

HMOs provide great coverage but normally require referrals from primary care physicians and treatment by specialists and hospitals within the plan’s network.

PPOs, meanwhile, offer greater flexibility by allowing you to use doctors, hospitals, and providers outside your plan’s network. You can save money by staying within the network, but you have the option, at additional cost, of going outside the network for medical services.

Other Medicare Advantage options include Medicare Private Fee-for-Service (PFFS) plans, usually allowing you to visit any doctor or hospital Original Medicare would allow you to visit, as long as the doctor or hospital agrees to treat you; HMO Point of Service (HMOPOS) plans, allowing you to get some services out-of-network for a higher cost; Medicare Medical Savings Account (MSA) plans, which deposit Medicare funds into an account used for paying your healthcare costs; and Medicare Special Needs Plans (SNPs), which provide focused, specialized healthcare for specific groups of people including beneficiaries of both Medicare and Medicaid, people in nursing homes, and people with certain chronic conditions.

Medicare Part D, which provides prescription drug coverage, was established in 2003 and took effect in 2006.

Failure to join a Medicare prescription drug plan when you are first eligible for Medicare can result in future penalties and limited enrollment opportunities if you want to join later, but exceptions are made for people who have maintained creditable, or essentially equal, drug coverage prior to enrolling in Part D.

While there are several coverage phases associated with Medicare Part D, the coverage phase of most concern to Part D enrollees is called the donut hole. During the donut hole phase, Part D enrollees are largely responsible for paying drug costs out-of-pocket. The donut hole phase is not reached, however, until a prescription drug plan and an enrollee, through copay or coinsurance charges, have paid a combined total of $2,970 for prescription drugs in a single year.

The Affordable Care Act of 2010, a.k.a. Obamacare, provides discounts on generic and brand-name drugs purchased during the donut hole phase, which is scheduled to be eliminated by 2020.

Also called Medigap plans, Medicare supplement plans are designed specifically to fill the gaps in Original Medicare. There are 10 Medigap plans in all, spanning the alphabet from Plan A to Plan N.

Plan C offers the basic services standardized by Medicare along with a few other benefits that aren’t covered by Medigap Plan A or Plan B.

Plan D, designed to cover most of the high-risk gaps in Original Medicare, has long been an affordable option in select markets.

Plan K offers coverage for a wide variety of services, and is a good choice for people who prefer lower premiums, have low medical expenses, and are willing to share in the cost of medical services throughout the year. Plan K begins paying 100% for all Medicare-covered services once out-of-pocket expenses meet the yearly cap of $4,460.

Plan L is similar to Plan K, but the Plan L out-of-pocket limit is set at $2,300. While Plan K pays 50 percent of coinsurance costs for most other Medicare-covered services, Plan L pays 75 percent.

Plan M offers increased cost sharing and includes many benefits similar to those offered through other options such as Plan D.

In many states Plan N has no medical underwriting. If this is the case in your state, you won’t be required to answer any questions about your medical or prescription history when you apply. A few states have limited underwriting for this plan.

The Medigap plans widely thought to offer the best protection for your dollar are Plans G and, especially, Plan F.

Plan F, widely considered the benchmark for Medicare supplement insurance plans, is designed to cover all the high-risk gaps left by Original Medicare. Plan F has proven to be a great tool for those who want to budget their annual healthcare costs, as Plan F’s comprehensive coverage is designed to leave you with no out-of-pocket expense for Medicare-approved services.

Plan G has established itself as a good alternative to Plan F. Plan G’s benefits nearly match those of Plan F, with the only difference being that Plan G doesn’t pay the Medicare Part B deductible. Plan G premiums are often about 20% lower than premiums for Plan F.

Every Medicare supplement plan is designed to fill the gaps in Original Medicare and ensure long-term savings, often to the tune of thousands of dollars a year.

Once enrolled in Medicare Part B, as long as you are at least 65 years old you enjoy a six-month period when no Medicare supplement insurance company can deny you a policy regardless of your medical history. In other words, you have guaranteed Medigap enrollment as long as you apply within six months of your enrollment in Medicare Part B regardless of whether you enroll in Part B at age 65 or much later. However, a company may require a waiting period of up to six months before covering any pre-existing conditions for which you received treatment or medical advice from a physician within the previous six months.

There may also be other times you qualify for Medigap guaranteed issue rights. During these periods, you cannot be denied the right to purchase a Medicare supplement plan.

One thought on “The Newbies Guide to Medicare”