Portland has long had a reputation as one of the hippest cities in the United States. In recent decades Portland has attracted many young professionals and people looking for a vibrant yet laid-back city with spectacular scenery, a cosmopolitan feel, and almost unparalleled diversity.

But did you know Portland is fast gaining recognition as one of the top places to retire in the USA?

In case you haven’t put Portland on your list of places to consider for retirement, here are a few reasons you might consider doing so:

A glance at US Census Bureau data shows Portland is a city people from all walks call home. About 14% of Portland residents were born outside the United States, and nearly a fifth speak a language other than English at home. Portland may not qualify in some people’s eyes as an All-American city, but for people who want to live in an all-embracing community where tolerance is expected, it’s often considered an ideal place. Portland is among the best educated cities in the US, with over 40% of residents over 25 holding at least a bachelor’s degree, which perhaps helps explain residents’ readiness to embrace change and diversity.

Portland’s diversity definitely spills over to food. In 2010, a Travel and Leisure article described “Portland, Oregon’s Cutting-Edge Cuisine” and asked: “Is Portland the most food-obsessed city in the country?”

Travel and Leisure’s answer: “It sure feels like it.”

Portland is home to all the ethnic specialties you would expect in a city of such diversity. It’s also noted for an abundance of food carts and a great many establishments that can prepare a variety of heart-healthy vegetarian dishes. Farmers’ markets are plentiful, and whether you eat at home or at any of the notable cafes and restaurants in Portland, you’ll probably understand why this city has earned such accolades in recent years for its cuisine and food culture.

Bicycling.com named Portland America’s Best Bike City for 2012. Small wonder, when you consider all the energy and planning that have gone into making Portland such a bike lover’s paradise.

According to sunset.com, Portland is home to about 17,600 bicycle commuters. Many thousands more, of course, are recreational bikers who enjoy making the most of Portland’s hundreds of miles of bicycle paths and trails. Portland’s public transportation is considered good, and many people, having made the decision that biking and using public transit are sufficient, choose to live without cars. Whether you go that far or not, Portland’s bike-friendly culture and infrastructure will give you every opportunity to get and stay in the best of shape.

When in Portland you’ll definitely want to check out the Pearl District, which for the past decade and a half has been a successful model of urban renewal. Formerly home to industry and warehouses, the Pearl in recent years has become noted for art galleries, crafts, and boutiques. Every Labor Day weekend, the Pearl hosts Art in the Pearl, a nationally known arts and crafts festival for people of all ages.

Portlanders are known for their support of the performing arts, and Portland is home to renowned ballet, symphony, and opera companies, and a popular film festival. There is an abundance of live theater, and various organizations in Portland are devoted to presenting or supporting the performing arts. Portland’s support for the arts has been recognized by American Style Magazine, which last year named Portland among its Top 25 Big Cities for Art. 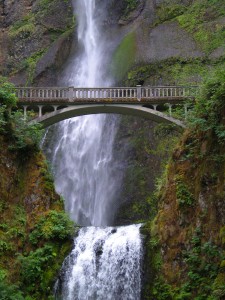 The Willamette River and the West Hills attract their share of attention, but what really makes Portland stand out is Forest Park, the largest wilderness area within the limits of any US city. Forest Park is more than 8,000 acres in size. New York’s Central Park, by comparison, is about a tenth that large—and Central Park is hardly wilderness! Portland is devoted to preserving Forest Park in its wilderness state for the benefit of future generations of Portlanders.

Portland has an abundance of parks, and has won a variety of awards and international recognition for being a “green city.” Portlanders are known to value their natural setting, and if you decide to call Portland home it’s highly likely you’ll want to spend much of your time soaking in the city’s natural splendor—including the spectacular views of Mt. Hood that you’re sure to enjoy on clear days.

Of course, if you venture out of Portland into some of the surrounding areas, you’re likely to be swept away by the majestic mountains and coastline that attract so many visitors to Oregon. Portland’s cost of living is a little higher than the national average, but health facilities there are excellent, and the city is one of the safest and most picturesque in the country.

Portland, Oregon, probably isn’t for the meek, but if you’re a senior looking for new challenges in a setting that can help keep you active, alert, and healthy, you’ll be hard pressed to find a better place.

Enjoy your retirement years—and let MedicareMall find the senior health plan that’s best designed for what you want to get out of retirement!

One thought on “Retirement Spotlight—Portland, Oregon”