Nowadays you can find retirement communities of some sort in just about every city in the USA.

But in at least one case, the retirement community is the city.

The Villages, Florida, is a planned community for seniors. The Villages began taking shape several decades ago about 50 miles north of Orlando. After a few starts and stops, property sales picked up in the 1980s, and owner Harold Schwartz purchased tracts of land in order to fuel the continued growth of the massive retirement community he envisioned. In 1992 the growing community—with subdivisions called “villages” spread over neighboring areas in three central Florida counties—began to be known as The Villages.

Oh, yes. One more thing. That figure of 50,000-plus represents the population of The Villages Micropolitan Area, which comprises only those “villages” and residents in Sumter County, Florida. But The Villages, remember, stretches into three counties. Add in all the “Villagers” living in the Lake County and Marion County portions of The Villages, and, all told, according to Forbes, you’re looking at a Villages population of 93,420 in 2010.

The Villages is an age-restricted community. Although a few subdivisions are set aside for families including children, most villages cater to people over 55, and the majority of homes must have at least one occupant over 55. Most Villagers are over 65, and, except in the subdivisions designated for families, few people younger than 19 are allowed to reside in The Villages.

What you have, then, is essentially a city of seniors. While you’ll find younger people working in the banks, stores, and restaurants throughout The Villages, it’s mainly seniors you’ll find on the golf courses, in the restaurant booths, and in the “town squares.” They often have younger guests accompanying them, but nearly everywhere you go in The Villages you’ll find a predominance of retired people.

The Slow Pace in The Villages

If you visit The Villages, you’d better get used to vehicles traveling no more than 15 or 20 miles an hour. Why is this? It’s because, in The Villages, the golf cart is king. There are miles and miles of golf cart paths and lanes all over The Villages, and whether you need to go to church, the hospital, or the supermarket, a golf cart will get you there. It’s often said that many seniors in The Villages whose eyesight no longer qualifies them to drive cars turn to golf carts as an alternative, and visits I’ve made to The Villages—particularly, sharing golf cart tunnels and narrower-than-usual lanes with oncoming carts—seem to bear that out. 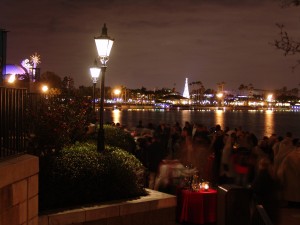 I remember watching a baseball game several years ago in The Villages and noticing immediately that there were two home plates. One, as it turned out, was where the batter stood and took a (slow, slow) pitch. The other home plate—down an unfamiliar base path wide of the infield—was where that same batter would run if he got on base, rounded third, and came in to score. The catcher, meanwhile, stayed by the first home plate. If the catcher received the ball from a fielder and touched his home plate before the runner crossed the other home plate, the runner was out. If the runner crossed his home plate before the catcher caught the ball and touched his version of home plate, the runner scored a run. The goal was to avoid home-plate collisions between the baserunner and the catcher—and it made sense, I guess … but it seemed odd to a lifelong baseball lover and baseball purist like myself. (After all, I still haven’t accepted the designated hitter rule.)